A "Triple-Double" of Chicago/Detroit Soul 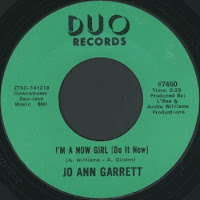 
Sheryl Swope - Are You Gonna Do Right This Time

It's no secret to any readers of this blog that your ever-lovin' Stepfather of Soul is a serious fan of Chicago soul records. There were so many labels in the Windy City putting out fine soul sounds, and Duo, a lesser-known label run by Chicago record distributors Jack White and Seymour Greenspan, was no exception. Sixteen singles were released on Duo between 1967 and 1971, none of which attained significant national success despite the veritable "Who's Who" of Chicago and Detroit soul involved with most of the releases on the writing and producing end: Andre Williams, The Brothers of Soul (Bridges-Knight-Eaton), Mike Terry, Billy Butler, Leo Graham and Deke Atkins, to name a few, are named on many of the sides. (This sort of Chicago-Detroit hybridization was fairly common at the time; for example, Jackie Wilson's "(Your Love Keeps Lifting Me) Higher and Higher" was recorded in Chicago with Carl Davis producing and the Funk Brothers playing!) Fortunately, several of the label's top-notch sides have been championed by rare soul and funk aficionados: "One Woman" by Jo Ann Garrett is a favorite of many, as is the funk monster "The Sad Chicken" by Leroy & The Drivers. Today's selections are a "trio of Duos" - a "triple-double," if you will - that I have been digging these days.

Jo Ann Garrett has appeared in three episodes of the Get on Down podcast - her Duo 45 "That Little Brown Letter" is part of Episode 36 - and her sides for Chess, Duo and other labels comprise a nice body of work that just didn't get the broader audience it deserved. Garrett worked frequently with Andre Williams, who produced and co-wrote the sassy and funky "I'm a Now Girl (Do It Now)" from 1968. Jo Ann's vocals are framed nicely by a strutting groove and some tasty guitar work.

Sheryl Swope crossed paths with B-K-E through a mutual acquaintance, and the Brothers of Soul's usual magic is present on "Are You Gonna Do Right This Time," which was released in 1969. Amidst another strutting groove and some very atmospheric background vocals, Swope expresses cautious optimism in taking back her man. "You were a wanderer, it's true, that's why I strayed away from you," she states. "But if I'll be a little kind, will you promise you'll be mine?" It's good stuff.

I don't know anything about The Love Column or the featured male vocalist, John Sibley, but the group's sole Duo 45 from 1970 was produced by Leo Graham, better known for producing Tyrone Davis's '70s hits, and Floyd Smith. The A-side, a Chicago soul take on the Brenda Holloway / Blood, Sweat & Tears classic "You Made Me So Very Happy" (which was also given a fine soul reading by Lou Rawls, incidentally) shows how the song can really work as a male-female duet, as Sibley and an uncredited female vocalist put over the right chemistry as they switch off lines. The arrangement plays it pretty safe for most of the song, adding some female cooing and (yes, I'm saying it again) some strut to the rhythm and string tracks, but then some chugging background vocals drop in with a neat "can't you love me just one more time" refrain near the end to make the end result pretty unique.