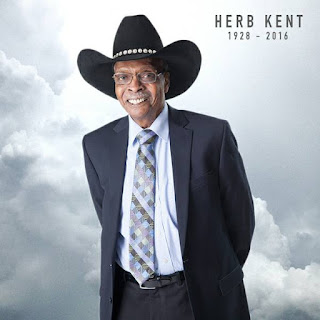 I was saddened by news over the past weekend that Radio Hall of Fame DJ Herb Kent passed away at age 88. Kent started his career in radio in the '40s and was on the air until the very end, having completed his regular Saturday morning show on Chicago's WVAZ before he passed away later that day. Kent's legend rests mostly on his tenure as one of the WVON "Good Guys" from the station's founding 1963 until 1980 or so. Fortunately for Kent, he managed to stay on the air in the Windy City, doing everything from a "Punk Out" show on WXFM (where he became perhaps one of the first black DJs in the country to play punk and new wave) to shows on WGCI and finally doing weekend shows for WVAZ (which is where I first heard him when I moved to Chicago in the '90s).

I never had the chance to meet "The Cool Gent" in person, but I credit him for introducing me to tons of great music and, more close to my heart, for declaring on his Facebook page in 2014 that this blog was a great "back in the day resource." That quiet endorsement meant the world to me, especially because I started the "Soul on the Air" series with one of his airchecks!

Enough of my eulogizing. Because I cannot be in the Chicago area this weekend for the planned memorials for Herb, I thought the least thing I could do would be to share a great Herb Kent aircheck. Presented in its entirety is Herb's Saturday night "Dusty Record Time" edition of his WVON show from February 26, 1965. (Herb coined the term "dusties" for R&B oldies, referring to the dust that gathered in the grooves of old records, and he - along with Richard Pegue - made that term a household word among Chicago radio listeners.) Among other highlights are Herb's playing of Cecil Gant's 1944 hit "I Wonder" alongside more recent and "dusty" material and Herb soliciting support from listeners in the staton's PET Milk contest. As usual, Kent closes out his show with The Gospel Clef's "Open Our Eyes," which I understand Gene Chandler performed at Herb's funeral.

Rest in peace, Herb Kent, "The Mayor of Bronzeville." Your contributions to the world of music are legendary and you truly brightened the lives of thousands - if not millions - of people who listened to you over your 70-plus-year career. Your reward is well-earned.