Wilson Pickett - Only I Can Sing This Song 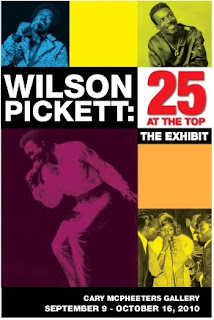 On Thursday I received an announcement on Facebook that the Auburn Avenue Research Library is hosting "25 at the Top," an exhibit about Wilson Pickett and his career that will run until mid-October. After making a few calendar adjustments, I made it to the Library for the exhibit's kickoff reception.

The exhibit has been put together by the Library in conjunction with the Pickett family. At the reception, after some soulful renditions of several Pickett songs by local entertainers, Max Pickett and his wife, Pickett's brother and sister-in-law, made a few remarks and took a few questions. (Several other Pickett family members were present, along with one of Pickett's long-time lady friends. In many ways, the event was truly a family affair!) After the Q&A session, the exhibit hall opened.

The exhibit features lots of great stuff, including the red velvet suit Pickett wore for the cover art of Mr. Magic Man, several gold records and BMI citations, tons of press clippings - both covering his successes, including one album review for Don't Knock My Love that asserts that James Brown should relinquish his "Soul Brother No. 1" title to Pickett, and his personal problems (the moderator of the earlier discussion cheekily said that some elements of Pickett's life were "T.I.-ish"), and some A/V materials. A popular exhibit was Pickett's Stutz sportscar which, although not the spectacle Isaac Hayes's Caddy at the Stax Museum was, quite a sight on its own.

I decided I needed to post "Only I Can Sing This Song" again (a rare "re-up") when I saw a framed lead sheet for it in the exhibit. Please see my original post about the song for that discussion.

I told Max Pickett that I wanted to publicize the exhibit on my blog, and he asked that I invite all of you, first to visit the official Wilson Pickett website, second to come to the Library to see the exhibit, and third, to come see "In the Midnight Hour: The Music of Wilson Pickett", a musical featuring Jennifer Holliday and Ann Nesby, which will be performed at the International Chapel at Morehouse College on October 9. I heartily recommend all of you who live in Atlanta or will be visiting to check out the exhibit and/or the musical!