First, some housekeeping: I can't believe that I was remiss in announcing on this blog that your ever-lovin' Stepfather of Soul and the Electro-Phonic Brian Phillips have collaborated for the December edition of The Electro-Phonic Sound of Brian Phillips over at Rockin' Radio. Rush on over there and check out the show (via the "Now Playing" page), in which my Stepbrother of Soul and I lay down that good stuff, while it's still online! 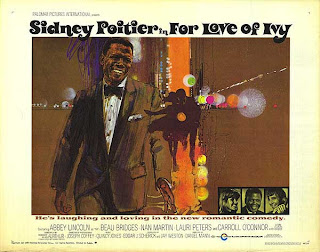 Today I feature one of those records that doesn't even come close to representing the best side an artist has ever committed to wax, but for some reason it catches my interest anyway. "The B.B. Jones" was one of three songs B.B. King contributed to the soundtrack of the 1968 Sidney Poitier move For Love of Ivy, the other two being "You Put It on Me" and the instrumental "Messy But Good." The two vocal tracks were co-written by Quincy Jones, who produced all three tunes, and famous poet Maya Angelou, who also co-wrote "Get Myself Somebody," a groovy dancer that's a personal favorite of mine.

"The B.B. Jones" meets most of the criteria for being a good '60s soul "dance craze" record: it's got a good rhythm section working under the vocals; there's a femme chorus lending strong backup support; the lyrics talk up the new dance, both by declaring that "everybody's doin' it," regardless of whether the dance actually exists (and in this case, I strongly doubt it), and by name-checking at least one contemporary dance purportedly replaced by it (in this case, the African Twist); and said lyrics provide amazingly vague instructions as to how to do the dance ("you let your shoulders get loose like stockings on a line," King declares at one point). The record doesn't quite pull it off, though, for a few reasons: (1) King, who has stated in many interviews that dancing was something he was never good at, doesn't convincingly sell the song; (2) the verses and chorus alternate between 4/4 and a funky 3/4 meter, making the erstwhile dance record somewhat difficult to dance to; and (3) the song's repetitive chorus, based around the phrases "everybody's doin' it" and "the B.B. Jones," almost gives the impression that the record is skipping when combined with the aforementioned 3/4 meter.

Someone at ABC Records believed in the tune, however, or at least in the song's Quincy Jones-Maya Angelou pedigree, as it received two 45 pressings on the BluesWay label, both as the "A" side. Further, someone in radio believed in it as well, as it made #98 on Billboard's pop charts while missing the R&B charts altogether. (The second pressing flipped the song with "You Put It on Me," a blues more up King's alley, that made it to #25 and #82 on the R&B and pop charts, respectively.)

Having stated all of the minuses of the record, I have to admit I like it. I like the groove despite the awkwardness the shifting meter creates, probably because of the song's stripped-down arrangement, and even though B.B. doesn't effectively sell the song, he gives it enough "oomph" to make it interesting for a spin or two.

As I once noted on this blog when discussing Johnnie Taylor's "Don't You Fool With My Soul," oddball recordings like "The B.B. Jones" would probably be better received had someone else done them, but they at least give fans a chance to hear something different than the hits they all know and love.