For at least six years now I've been following the career of Eli "Paperboy" Reed and his band, the True Loves, and I've featured several of their recordings here. Last week was the U.S. release of Come and Get It, the group's album for Capitol Records. The album was released in Europe on Parlaphone in the spring to great notices, and the group toured the continent, receiving lots of press attention and getting radio play as well. Having followed Eli since he was a student/church musician in Chicago, it's my hope that American audiences get exposed to his talent and that the album is a success. (It appears that things are on the upswing already: the album has made Billboard's Heatseekers chart and is among iTunes' Pop Album Chart Top 30; he's been featured on CNN, and the album's title track has managed to sneak into the Billboard Hot 100. I wish I could say the same about the R&B charts, but that's a discussion for another day.) 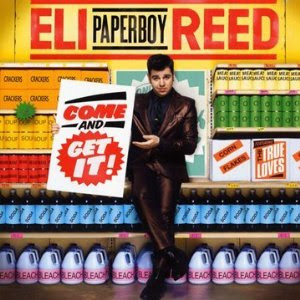 Come and Get It was produced by Mike Elizondo, and the production is top-notch. I have to laugh as I recall the lower-fi nature of his first recordings (and how he bragged about such "sound"); the tracks here are as bright and shiny as a new dime. Although there's been some grumbles among hidebound soul fans about the album being too slickly-produced, I'm fine with it: I mean, first of all, all of us who've known Eli know that he's the "real deal" when it comes to the sounds of soul we all love; secondly, a label like Capitol is not going to accept anything less; and lastly, I want him to reach as many people as possible, and not just those of us whose tastes venture into the esoteric!

Choosing which tune to feature was a bit challenging, as Eli and the band successfully capture several different styles of soul on the album: the title track is a piece of sunny pop-slanted soul with a slight reference to Bob Kuban's "The Cheater" at the end of the first chorus; "Time Will Tell" is a Southern soul ballad; "Young Girl" has a '60s Philly vibe to it, in my opinion; "Explosion" is a bombastic dancer; "Tell Me What I Wanna Hear" has a '60s Motown lope; and "You Can Run On" is another gospel adaptation along the lines of "Take My Love With You" from Roll With You, his last album. I decided to go with "Help Me," which has grown on me over repeated plays.

"Help Me," a nice mid-tempo tune with a Southern soul feel, finds Reed seeking his woman's assistance in keeping him on the straight and narrow of fidelity while out on the road. Over a nice guitar and bass heartbeat Reed makes his plea while a femme chorus and nice horn charts provide nice support. Reed's vocals stay at a relative simmer for the most part, letting the rhythm of the tune convey the song's urgency. When he finally opens up for the coda, the band settles into a nice strut that allows him to take it all home.

Come and Get It is a great album to introduce Reed to newcomers to his sound, and represents the logical "next step" in the progression for those of us who've been following him over the years. You need to have this album! (For you vinyl fans, there's an LP as well!)

POST SCRIPT - The True Loves are in top form on this album, both with respect to instrumental backing and background vocals (their harmonies on "You Can Run On" completely capture the flavor of those great gospel quartets, from bass to falsetto, while Reed seems to channel a Valentinos-era Bobby Womack). They also have a record out. Their single, "Crack Symphony" b/w "Plan B / D.T.M.W.I.S.," is available for listening and purchase from Q-Dee Records (on which Roll With You was released). Check it out!

Pickett, Out of Pocket?


Wilson Pickett - Love Will Keep Us Together

As I write this post I am saddened to realize that it's been nearly five years since Wilson Pickett ascended to "soul heaven." May he continue to rest in piece!

As I noted at the end of a series of tributes to Pickett I did back then, one of his strengths was that he could take just about any song and make it his own. Today's feature is another example. Although I must agree that Pickett's 1976 take on Neil Sedaka's "Love Will Keep Us Together" (a smash hit for The Captain & Tennille in '75) is not a highlight of his catalogue, I think that it has been unfairly dismissed by many, as is the case with most of his post-Atlantic recordings. The single was released on Wicked, a short-lived, T.K.-distributed label set up by the singer after he left RCA, and it managed to make it to #69 on the R&B charts. Pickett even performed the song on "Soul Train," so clearly it wasn't the disaster it is often described as in retrospectives of Pickett's career!

Here, Pickett and producer Brad Shapiro wisely avoided the cheerful bounce of the Captain & Tennille record, choosing instead to use a slower, Miami-flavored groove. With a little support from a femme chorus - whose vocals were less cloying than those on the hit - Pickett sells the song nicely. Again, I wouldn't call it a highlight of Pickett's career, nor would I call it a highlight of his '70s post-Atlantic recordings - his ballads on RCA like "Only I Can Sing This Song" or "I Sho' Love You" would vie for that title - but it's worth a listen.

(By the way, your ever-lovin' Stepfather of Soul must disclaim that though terms like "cheerful bounce" and "cloying" were used in this post to differentiate Pickett's version of the song from that of The Captain and Tennille, whenever their version comes on oldies radio I love hearing it. It's a textbook example of the quirky nature of '70s pop.)

"Get on Down" #37 - The Stepfather's Soulful Allsorts! 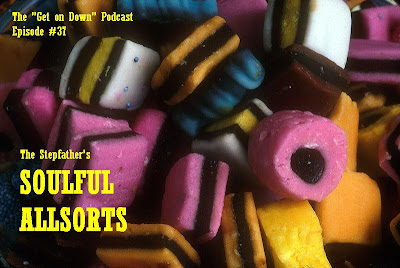 Episode 37 of the "Get on Down" podcast is now coming your way with an assortment of soulful goodies! Here's the playlist: