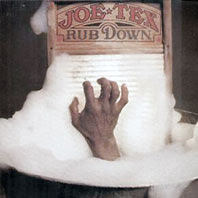 Lately your ever-lovin' Stepfather has been on a serious Joe Tex kick, listening to everything from his '50s sides through his disco-era stuff. Of course, I've been a Joe Tex fan for years and he is no stranger to this blog, but sometimes it's good to go back to the old favorites, you know?

Today's selection comes from Joe's Epic LP Rub Down, which has accurately been described by some music critics as seeming to consist of leftover material from the Bumps and Bruises sessions from which "Ain't Gonna Bump No More With No Big Fat Woman" emerged as a hit (the title track, for instance, borrows the structure of "Bump"). As I noted in an earlier post featuring "Leaving You Dinner" from Bumps and Bruises, Tex didn't just do the disco thang on the two LPs, though, and "Get It," an album cut from Rub Down, provides an example of a nice Southern-tinged groove that's good for a "get down" or two.